Out at last, as a new volume in the BSI Archival History series. 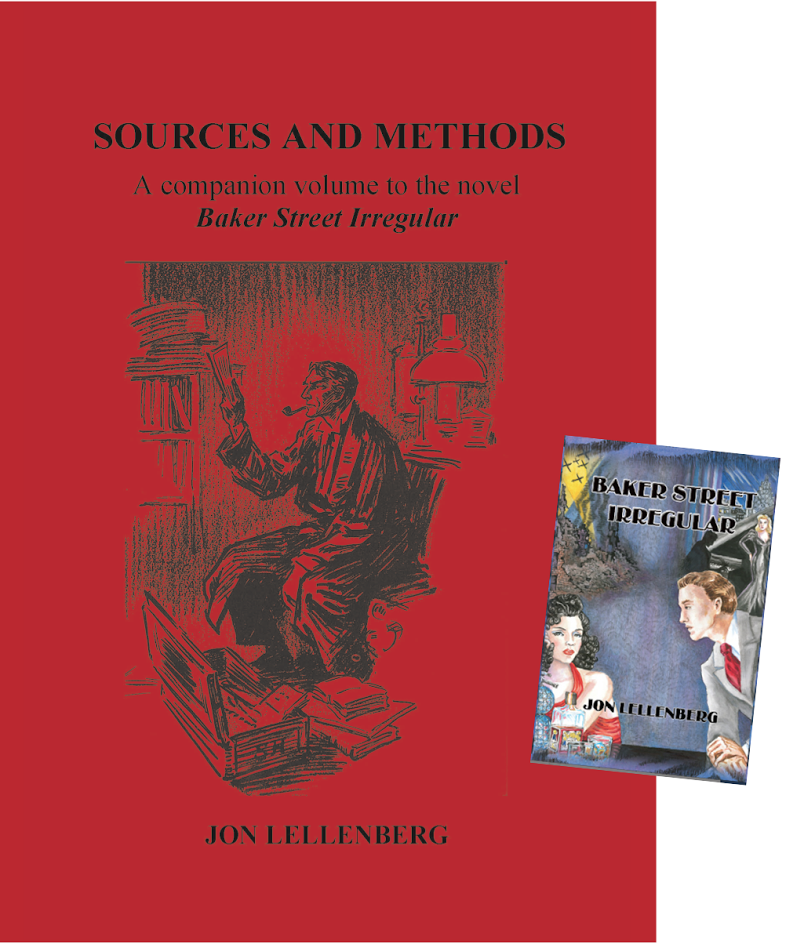 Regarding the novel, in 2010 military historian Thaddeus Holt Jr.,
a member of The Five Orange Pips, wrote:

You may assume many of this book’s adventures, and many of the people Woody Hazelbaker meets, to be the product of the author’s imagination. You will usually be wrong. With a kaleidoscope of real events both famous and little known, of real people both prominent and obscure, this readable book shows how true is Sherlock Holmes’s observation that “Life is infinitely stranger than any-thing which the mind of man could invent.”

from the Companion Volume's FOREWORD:
I hoped to do this book before now, and hope that some will be interested in the information in it—both about the Baker Street Irregulars’ history, and their world during the decade and a half the BSI took shape. It explains why Baker Street Irregular was written, and how. “Sources and Methods” is a term in the intelligence community that also took shape in those years, whose formative stages provide part of the novel’s story line. Sources and Methods are critical to collection of raw intelligence and its analysis into useful product to inform policy; and in wartime, strategy and operations. They normally must be kept secret—but not here. I want instead to disclose the sources and methods behind Baker Street Irregular for readers who’d like to know more about the personalities, institutions, and events in it. And for the sake of the historical record, since I spent thirty-five years in the kind of work that Woody Hazelbaker, the novel’s protagonist and narrator, goes to Washington in 1940 to do, in the novel's Ch. 12.
Some Irregulars in the novel are heroes of mine. But so are many of its other characters, real men and women also, who didn’t spare themselves in the struggle to preserve liberty at a time when democracy was in mortal peril—something Irregulars of the 1930s and ’40s realized as well. I was pleased when M. J. Elliott, reviewing the novel for the Sherlock Holmes Journal, said: “unlike many pieces of historical fiction, the book does not wear the author’s research on its sleeve.” Nonetheless, as this volume will show, a great deal of research did go into it, because I wanted the story to be real, and to tell real stories of those years. Baker Street Irregular is a work of fiction, but every word of it is true.

or by PayPal to jonlellenberg@gmail.com.

Posted by Jon Lellenberg at 11:01 AM No comments:

The BSI Archival History website continues to be updated, the latest being a new discovery by Mike Dirda at the Ask Thucydides dept., and a link to a lovely tribute to the late Ronald Mansbridge, one of my all-time favorite Irregulars, at the Editor's Gas-Bag.
Posted by Jon Lellenberg at 3:51 PM 1 comment:

BAKER STREET IRREGULAR
A nice comment about the novel by mystery writer and Sherlockian Dan Andriacco at his blog recently, greatly appreciated by me:
http://www.bakerstreetbeat.blogspot.com/2012/07/irregular-but-wonderful.html

I'd have posted Mr. Andriacco’s kind comments sooner, but only returned last night from several magnificent weeks in Yorkshire and Scotland.  I will post a few words about the Doylean aspects of the trip, especially my visit to Peterhead, from which Conan Doyle sailed on the Arctic whaler Hope in February 1880, in a couple of days here.
Posted by Jon Lellenberg at 2:42 AM No comments:

MY APOLOGIES for the lengthy time my BSI Archival History website sat on a virtual shelf. In the autumn of 2010, Dan Stashower and I agreed to co-edit the first of two new books about A. Conan Doyle for the British Library, and keeping my website active fell victim to this among other things. The first book was an annotated transcript of Conan Doyle’s first attempt at a novel in 1883, The Narrative of John Smith; it came out last October. The second, “Dangerous Work”: Diary of an Arctic Adventure, will be published in September. It’s a facsimile with an annotated transcript of the hand-written and –illustrated diary Conan Doyle kept as ship’s surgeon on the Arctic whaler Hope in 1880. It has not been read by others for over fifty years, and concludes with a direct link to the first Sherlock Holmes tale.

So much for A. Conan Doyle for a while, and back to BSI history. You will find at the website -- http://www.bsiarchivalhistory.org -- my “Ronald Knox Myth” essay for the Sherlock Holmes Journal (plus another blow to the myth in the Disputations department), two additional essays, a Q&A at Ask Thucydides, new Links of the Week, and more. I shall endeavor to keep the website up to date from now on — or anyway, after returning from a few weeks’ vacation in Yorkshire and Scotland.
Rodger Prescott of evil memory

At last August’s Sherlock Holmes Collections weekend at the University of Minnesota, significant attention was paid to the late Allen Mackler (“Sarasate”), including tributes by Dr. Paul Martin (“Dr. Leslie Armstrong”) and me at the installation at the Wilson Library of the marvelous 221B sitting-room Allen had created in his Minnesota home and left to the Collections.


It's largely thanks to another fabulous bequest by Allen that the new permanent E. W. McDiarmid Curatorship for the Sherlock Holmes Collections has been created. Before moving to Minnesota Allen lived in Washington D.C. and worked at its NPR affiliate WETA-FM, with his own weekly “Collectors Forum” program featuring music from his immense personal collection of vintage 78rpm classical records. On one occasion he presented “Sherlock Holmes and Music,” and E. W. McDiarmid Curator Timothy Johnson has just added a recording of that program to the University Libraries’ media section, at http://umedia.lib.umn.edu/node/91221/197384.
Posted by Jon Lellenberg at 5:38 AM No comments:

From Dr. Wesley Britton of spywise.net:
Next Tues., Jon Lellenberg, literary agent of the Sir Arthur Conan Doyle estate, will discuss Doyle and his most famous creation on Dave White Presents. Jon will  also talk about a remarkable group known as the Baker Street Irregulars and his new novel—BAKER STREET IRREGULAR—a blend of fact and fiction, mystery and espionage. And a touch of Mr. Holmes as well . . .
The new edition of DWP debuts Tues. Feb. 15 at 7:30 p.m. Eastern, then 7:30 Pacific over www.KSAV.org
On Wed. Feb. 16, the program will become available for download anytime you like at
www.audioentertainment.org/dwp
I’m interviewed for thirty minutes about the BSI and my novel, followed by other features on what is a 90-minute biweekly program in all.  Even if you can’t catch it that night, it can be accessed at the second website above any time from the following day on.
Posted by Jon Lellenberg at 7:04 AM No comments:

Something new in BSI Archival History

about Christ Cella’s Speakeasy.
http://www.bsiarchivalhistory.org/BSI_Archival_History/Fischetti.html
Something unknown to Waal, also to Baker Street Irregulars:  the tough cop who protected Christ Cella’s speakeasy during Prohibition when Christopher Morley and his kinsprits were cooking up the BSI there, and what he thought about Sherlock Holmes -- a minority report from around that fabled table in Christ Cella’s kitchen, and published long ago by one of the original Baker Street Irregulars, but entirely forgotten until now!
Posted by Jon Lellenberg at 3:20 PM No comments: